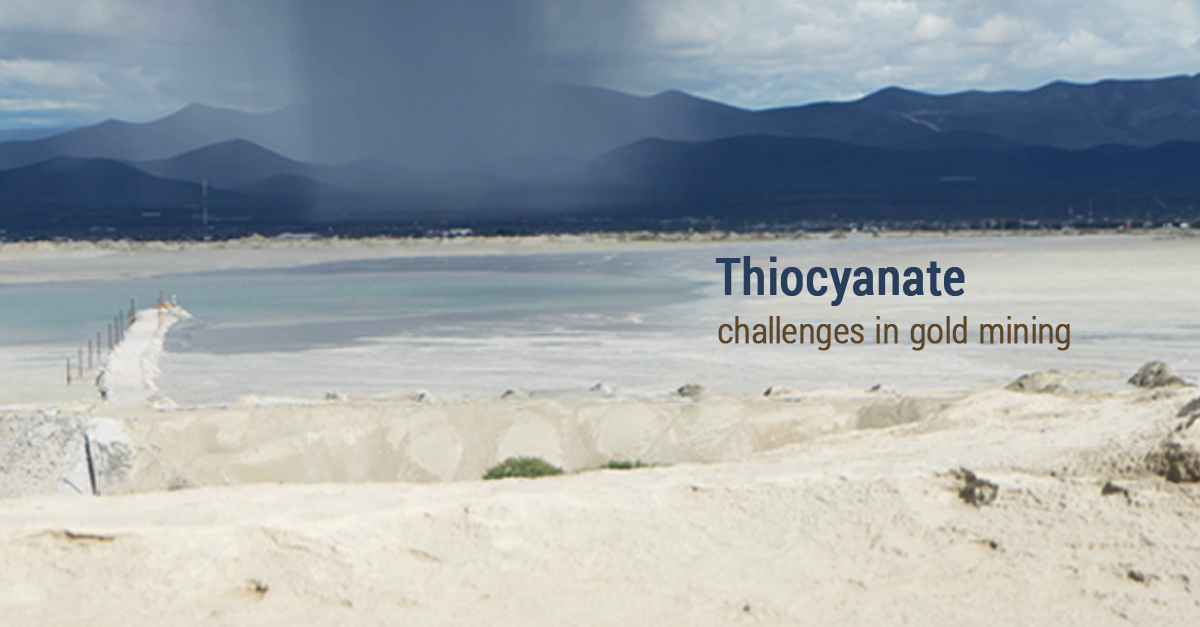 Thiocyanate is a growing environmental challenge for the gold industry. Harmful to both humans and aquatic life, thiocyanate presence is becoming more prevalent in gold mining effluents. It is formed when cyanide reacts with sulphur containing minerals and/or compounds released into solution during the metallurgical extraction of gold. Ore bodies rich in pyrrhotite, an iron sulphide mineral, are especially susceptible to thiocyanate formation.

How ores are processed also contributes to thiocyanate occurrence. Sulphide rich refractory ores processed through bio-oxidation or partial oxidation in autoclaves to liberate gold prior to cyanidation often create reactive sulphur compounds including elemental sulphur. When the pre-treated ore comes into contact with cyanide solution, thiocyanate is formed.

Gold ores with significant base metal sulphide mineralization are sometimes processed through mineral flotation followed by cyanidation of either the flotation concentrates or tailings depending on gold deportment. Sulphur contained in the concentrates leads to thiocyanate build-up in the process water.

Gold has been mined for millennia. The precious metal has been used as both currency and the basis on which currencies have been fixed, in jewelry and other artifacts of value, as components for electronics, in dentistry and many others. So why is thiocyanate only now becoming an issue for the gold industry?

Clean vs Dirty Gold Deposits
Historically, gold has been produced from relatively “clean” deposits employing either gravity separation and/or cyanide leaching with low cyanide consumption. When “dirty” gold deposits with complex metallurgy were discovered, they were set aside as other clean gold targets could be exploited more economically.

In the last two decades, a shift has been taking place as discoveries of new “clean” gold deposits have become scarce. Some mines put into production since the early 2000’s involve “dirty” ore bodies with significant cyanide soluble base metals and iron sulphides that require high cyanide consumption or refractory ores that require pre-processing to liberate gold prior to cyanide extraction.

The lack of new gold discoveries have also led mining companies to evaluate the re-processing of old tailings from historic gold and base metal mines. While some of these tailings may contain economically attractive values of gold and silver, the highly non-homogenous geochemistry and mineralogy of these tailings creates challenges for metal extraction. Despite mitigation techniques such as lead nitrate addition to the leaching circuit or the pre-oxidation of ore, flotation concentrates or tailings prior to cyanidation, significant thiocyanate formation cannot be avoided in many situations.

Water Use Minimization
Along with metallurgical processing becoming more complicated from complex ore bodies, the industry finds itself under ever increasing scrutiny related to water use, consumption, tailings storage and associated environmental controls. Many new operations are now required to minimize water use.

It is not uncommon now for dry stack or filtered tailings storage, which minimizes water loss, to be preferred over conventional wet tailings ponds. Consequently, modern metallurgical plants are being designed with closed water balances to maximize the recycling of process water. While this conserves water, recycling leads to an accelerated build-up of various constituents and contaminants including thiocyanate.

Environmental Regulations
One of the major trends shaping the industry is the continuous tightening of environmental regulations and requirements to demonstrate no harm. Some jurisdictions have adopted specific thiocyanate limits for the discharge of process water. In Russia and some countries of the former USSR, a 2 mg/L standard applies.

Others regulate thiocyanate indirectly such as China where process water discharges from metallurgical facilities are subject to a Chemical Oxygen Demand (COD) limit. Thiocyanate is often a major contributor to the overall COD level in process water that needs to be treated prior to discharge.

In North America, thiocyanate is regulated indirectly though effluent toxicity where discharges from mines are subject to acute/lethal and chronic toxicity testing and reporting. While thiocyanate exhibits only a moderate direct acute toxicity, it can cause a major increase in effluent toxicity indirectly through the production of acid which changes pH levels of the receiving environment and/or during toxicity tests.

Conventional Cyanide Destruction Ineffective for Thiocyanate
Here in the west, the most prevalent method for destroying residual cyanide in tailings and process solutions is the SO2/Air process followed by Caro’s acid and peroxide treatment. While efficient for cyanide detoxification, none of these processes remove thiocyanate to any significant extent and especially not to any levels required for environmental compliance.

As major producers need to maintain steady and stable gold reserves on their balance sheets, they will need to replace ounces depleted from historic projects with fresh new ounces. An increasing amount of this new gold will be coming from complex gold ore bodies and/or the reprocessing of historic tailings, which will lead to the production of thiocyanate. In Part 2 of this series, we will look at options to control thiocyanate for environment compliance in gold mining and extraction.